A Georgia homeowner shot and killed three masked teenagers around 4 a.m. Monday after one of the attempted robbers first discharged his own weapon, authorities say.

The three suspects, two 16-year-old males and one 15-year-old male, approached the Conyers, Ga., house with their faces covered and tried to rob three individuals in the front yard, according to the Rockdale County Sheriff’s Office.

One of the teens allegedly brandished a handgun and fired shots at the residents before one of the intended robbery victims produced his own gun and returned fire, striking all three attempted robbers.

One suspect died at the scene, while the other two were pronounced dead at a local hospital, police say. None of the intended targets were injured. 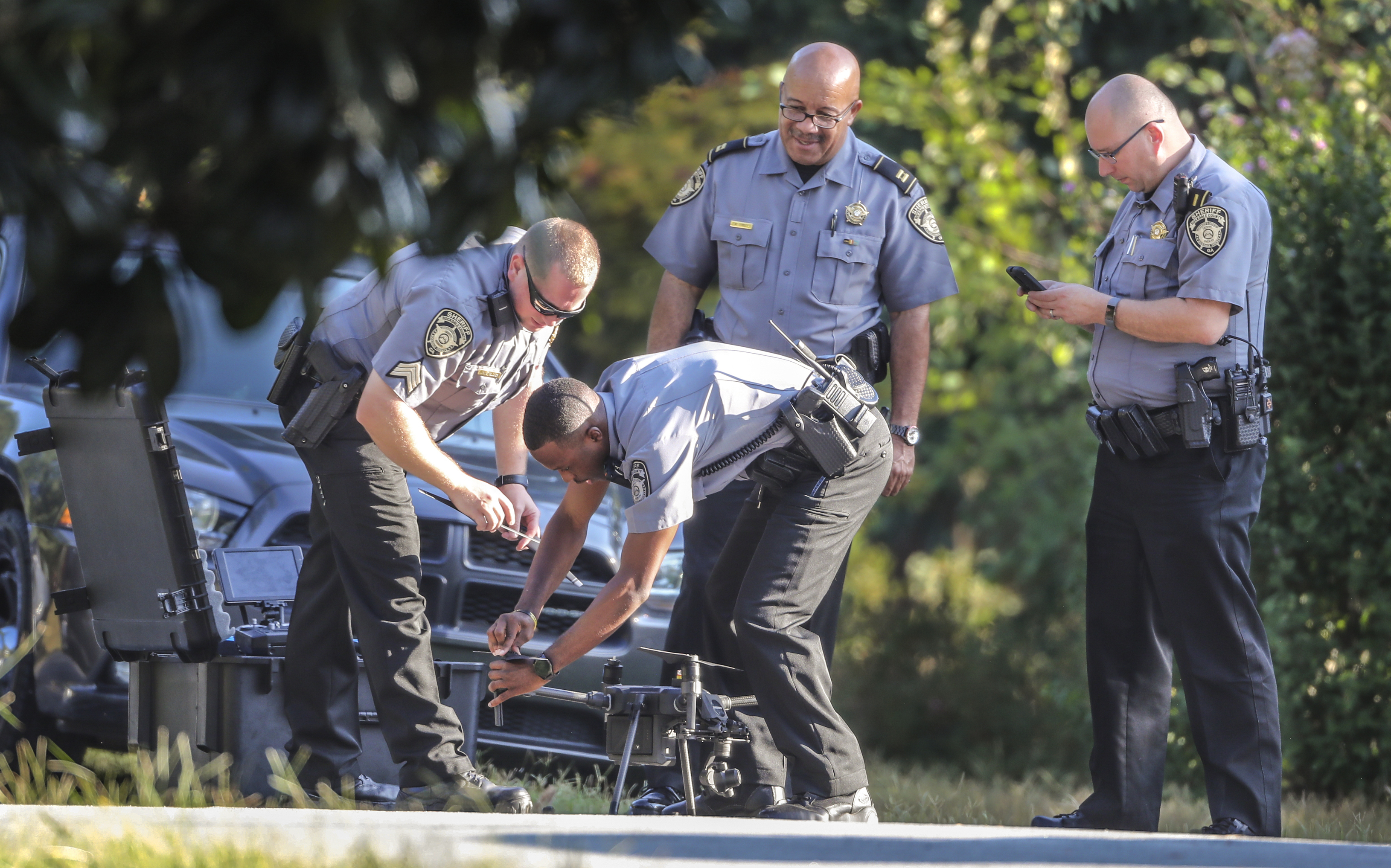 In this Monday, Sept. 16, 2019 photo, Rockdale deputies prepare to fly a drone at the scene of a deadly shooting at a residence in Conyers, Ga. Rockdale County sheriff’s Deputy Lee Thomas says the resident of a home shot three males early Monday morning. (John Spink/Atlanta Journal-Constitution via AP)

Officials declined to name the three suspects, but family members identified two of them as 16-year-old Isaiah Reid and his 15-year-old brother, Jaime Hernandez.

The boys’ aunt, LaShawn Thornton, told WXIA-TV her nephews were very close and described them as “loving.”

“I hope that someone can come forward and let us know what’s going on,” she told the station. “Because this is, like, devastating to my family. There are three teens that are dead now. And we all loved them.”

No charges have yet been filed in the ongoing investigation, which could possibly become a “‘stand your ground’ type of case,” Rockdale County Sheriff Eric Levett said during a Monday press conference.

Georgia is one of 25 states to have enacted “stand your ground” laws, which allow people to respond to imminent threats with any means necessary, including lethal force, without fear of criminal prosecution.

Florida’s own “stand your ground” law was thrust into the spotlight in 2012 when neighborhood-watch volunteer George Zimmerman fatally shot unarmed black teenager Treyvon Martin and claimed it was in self-defense. He was ultimately found not guilty of second-degree murder.

The law again made headlines in 2018 after the legal team for Michael Drejka attempted to use the law in his defense after he killed Markeis McGlockton during an argument over a parking spot.

In April 2019, Drejka was found guilty of manslaughter. His sentencing hearing has been set for Oct. 10 and he may face up to 30 years in prison, the New York Times reports.

0
August 21, 2020 | 7:21pm A Georgia cop has been fired after he was caught on a viral TikTok video tasing an unarmed black woman on her front porch, officials said Friday. Michael Oxford, formerly of the Gwinnett County Police Department outside of Atlanta, was first placed on desk duty following the Tuesday incident and…
Read more
Uncategorised

0
A Georgia police officer has been fired after a video was widely shared on social media that depicted him using a taser on a woman during an arrest outside a home in Loganville. The Gwinnett County Police Department terminated Officer Michael Oxford after an investigation found he "violated our policy and did not meet our…
Read more
Uncategorised

0
A high school in Georgia that shot to national attention this week, after photos of the packed school corridors with mask-less students went viral, has announced that it is temporarily switching its lessons to online-only. North Paulding High School confirmed six new cases among students and three infections of staff members, less than a week after…
Read more
Uncategorised

0
In news that may bolster arguments against reopening school campuses soon, the Centers for Disease Control has reported that a Georgia sleepaway camp saw 168 kids contract the virus. The YMCA Camp High Harbour required masks for counselors, but was forced to close in June after the outbreak. In the gathering of 344 campers and…
Read more
Uncategorised

0
August 2, 2020 | 10:50am A Georgia sleepaway camp that required masks for counselors was forced to close in June after more than 260 attendees contracted coronavirus, the Centers for Disease Control said. Out of 344 campers and staff tested for the COVID-19 virus, 260 came back positive in the weeks after the camp closed,…
Read more

Who is Joe Burrow? 5 things to know about the LSU Tigers quarterback – Fox News

0
Joe Burrow is getting ready to play in the national championship game and then move onto the NFL.Burrow has played all four years in college, divided between Ohio State and LSU, and elevated his status during his final season with the Tigers. He went from a middling quarterback to a superstar on the cusp of…
Read more
Uncategorised

Why the NFL Is Suddenly Standing Up for Black Lives – Slate

0
Roger Goodell knows which way the wind blows. NFL/Twitter Four months ago, a week after the Super Bowl, the Undefeated—ESPN’s website dedicated to race, sports, and culture—posted a video of a conversation between former NFL receiver Victor Cruz, venerable sports columnist William C. Rhoden, and Houston Texans star Deshaun Watson, among others. The video was…
Read more